Settle down, this will be a longer post today as a lot has been happening.

My room is was equipped, the bed doubles as a sled in case of a sudden ice age. 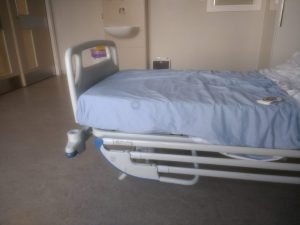 I was due to go into the Christie on Friday 29th May for a minor op to open the exit from my stomach to my duodenum. In the event I started running a fever the previous Wednesday evening so they brought me in to deal with that.

The infection was brought under control, although not eradicated. It was decided to postpone the op until the Monday so I was put on Nil By Mouth from midnight on Friday until after the op. Yes, around 60 hours with no food or liquids other than intravenous feeding. To add to the fun my stomach needed to be drained on Saturday morning using something called a Ryles tube, not exactly a pleasant experience but in all fairness not really painful.

I’ve had a blood transfussion, after many donations this is my first withdrawal. 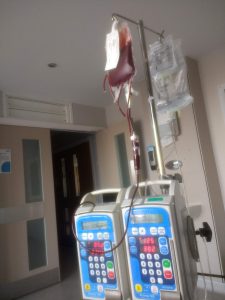 Through the weekend my Ryles tube seemed to be producing very little, my temperature was dropping whilst my infection markers kept rising although at a slower pace. All of this to the backdrop of continuing pain, although I felt there was light at the end of the tunnel, even if it might be a train coming the other way.

I’ve been given support stockings to wear. Very fetching… 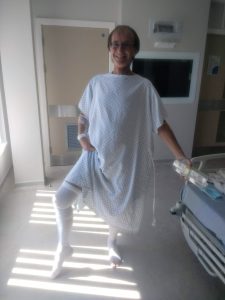 Monday rolled round and I was wheeled down to an x-ray theatre for my op. The consultant looked at my empty Ryles bag and questioned why I was there, quite rightly as it turns out. The op is to put a stent in where there is a blockage between the stomach and duodenum that prevents you eating properly, clearly not the case for me as the bag was empty. In the event they performed an extensive scan with marker dyes and confirmed there was no blockage so no need for a stent.

Back to the ward and rethink time. While I was waiting to see my own doctor and consultant I did did some reading of my own and found that the blood thinner I had been injecting since 10th February has a rare side effect of causing abdominal bleeding which causes a tender and bloated stomach. The main symptoms I had been suffering from since around mid March, a month or so after going onto Fragmin. I mentioned this to my nurse, pharmacist and doctor. All agreed it was worth thinking about and it was passed up to Prof Valle. His conclusion was that moving off Fragmin may help and was unlikely to make things worse so was worth a try.

He had also been looking into my scans and blood results in more detail and felt that there could be a lingering infection previous treatments hadn’t killed off. This could well be in the gallbladder, hard to deal with as there are no blood vessels so it’s harder to target. That became his main target and he got my doctor working with microbiology to come up with a revised antibiotic strategy.

From then on progress has been steady and significant, I’ve been having fewer problems with pain every day, other than yesterday when the pain kept creeping up, but even that had an explanation. In hospital they had me on a syringe driver, a device that injects the slow release painkiller steadily 24 hours a day. That was turned off in the morning and my first oral equivalent was given to me, the problem being that takes around 18 hours to kick in. Once the penny dropped I was given a quick release liquid version of the painkiller and, hey presto, very quickly felt better.

The last few days I’ve had better sleep, including being able to lie down, and less pain than I’ve had for weeks. I’m now at home recovering and feeling much happier.

All of this may sound like a number of mistakes but that isn’t the case. Working out what is happening in something as complicated as the human body is really difficult. Twenty twenty hindsight is great but shouldn’t hide the fact it can take time to zero in on causes and remedies. There are no guarantees but they will monitor by blood results for a few weeks, if all goes well we can then treat this as ‘problem solved’.

After that I will go back in for the end-of-chemo scan so we go back to considering our longer terms plans.

I think there may be a few lessons here for those of you unfortunate enough to fall ill with something tricky to handle: